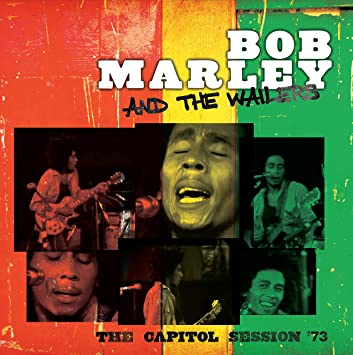 RESTORED AND AVAILABLE FOR THE FIRST TIME — OUT ON DVD+CD, CD, COLORED 2LP, AND DIGITAL FORMATS

New York, NY — The scene is Hollywood. October 1973. International reggae pioneers Bob Marley and The Wailers were filmed in a closed door session at The Capitol Records Tower on October 24 by famed producer Denny Cordell, who received the blessing from Marley to capture the band recording 12 songs. Shooting with four cameras and mixing “on the fly” to a colorized tape, this footage, has been painstakingly restored, resulting in an incredible presentation of this unseen live session.

Today, September 3, Tuff Gong and Mercury Studios are proud to present this concert (almost 50 years after it was recorded): Bob Marley And The Wailers: The Capitol Session ’73 on DVD+CD, standalone CD, 2LP pressed on green marble vinyl, 2LP pressed on Rasta swirl vinyl (red, yellow and green – available exclusively at Sound of Vinyl), and digital formats. A track from the set — “Stir It Up — is available to view here on Instagram.

This session at Capitol Studios represented a unique moment in the band’s career. Filmed 10 years after their formation, Bob Marley and the Wailers already had several established hits through the ska and rocksteady eras. Gaining recognition stateside, including a few shows with Bruce Springsteen at Max’s Kansas City in NYC, they then went on to tour with Sly and the Family Stone, before they had been unceremoniously dumped from the tour. This led to the band (Bob Marley, Peter Tosh, Joe Higgs, Aston Barrett, Carlton Barrett, Earl “Wya” Lindo) making their way to Hollywood to do this session.

The footage from this session was considered lost until a freelance researcher uncovered a few frames. For over 20 years, archives and storage units from New York and London to San Diego were tracked down and searched to retrieve fragments of the film, until it was fully unearthed, restored, and remastered.

Evolving into a politically and socially charged unit after being inspired by the US Civil Rights movement, various African liberation efforts, and Rastafari, which Bob Marley and the Wailers studied from Rasta elders, their music reflected the soul and struggles of the era. Making poignant statements about life, liberty, and social justice, the sentiments are imbued in the songs, which are beautifully brought to life via Bob Marley and The Wailers: The Capitol Session ’73.

Bob Marley, a Rock and Roll Hall of Fame inductee, is notable not only as the man who put reggae on the global map, but, as a statesman in his native Jamaica, he famously brought together the country’s warring factions. Today, Bob Marley remains one of the 20th century’s most important and influential entertainment icons. Marley’s lifestyle and music continue to inspire new generations as his legacy lives on through his music. In the digital era, he has the second-highest social media following of any posthumous celebrity, with the official Bob Marley Facebook page drawing more than 70 million fans, ranking it among the Top 20 of all Facebook pages and Top 10 among celebrity pages. Marley’s music catalog has sold millions of albums worldwide. His iconic collection LEGEND holds the distinction of being the longest-charting album in the history of Billboard magazine’s Catalog Albums chart and remains the world’s best-selling reggae album. Marley’s accolades include inductions into the Rock and Roll Hall of Fame (1994) and ASCAP Songwriters Hall of Fame (2010), a GRAMMY® Lifetime Achievement Award (2001), multiple entries in the GRAMMY® Hall Of Fame, and a star on the Hollywood Walk of Fame (2001).  For more information, visit: bobmarley.com and facebook.com/bobmarley.

Founded by cultural icon Bob Marley and Rita Marley, Tuff Gong International is the legendary home of reggae music. The Jamaican born singer/songwriter’s life and music made a global impact that continues to influence pop culture to this day. Tuff Gong’s Kingston headquarters is a reflection of its founders’ vision to use music as an instrument of inspiration and empowerment. The landmark compound includes a world-class recording studio, music and video production facilities, and distribution offices as well as the lone operative vinyl record pressing plant in the region.

Mercury Studios is a multi-faceted content studio established to develop, produce, globally distribute and invest in innovative, music-rooted storytelling across a range of media including film, television, podcasting, publishing and live-streamed performance. Taking its name from the iconic Mercury Records label, Mercury Studios is powered by Universal Music Group and creates an open space for experimentation to unleash and amplify both emerging and established artists. With offices in London and Los Angeles, Mercury Studios harnesses its established relationships with best-in-class talent from music and film, seamlessly bridging the two worlds to create a completely distinctive community of trailblazers driven by original IP, innovation and collaboration.